Passa ai contenuti principali
e. luglio 21, 2008
And we'll bring you love (once again)
An interview with I'm From Barcelona 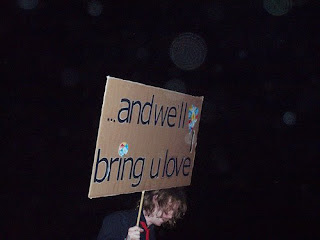 - I'm From Barcelona - Paper Planes -
After three years of joyful parties all over the world, have you ever felt a bit tired or lacking motivations? And how do you keep things going?
Emanuel: Of course sometimes we're down and unispired. But the great thing about our band is that there's always someone of us who's on top and euphoric. That gives everyone energy.
Marcus: I think I speak for everyone in the band when I say that we usually are tired from touring, but this only lasts one or two days after a tour. Around the third day after a tour, we are eager to get back on the road again. So, by then we meet up for a beer, coffee, party or something around town. Every tour is a new start to our adventure of travelling in a big group lika a bunch of old people, with the big difference being that we still have the strength to party and play live music.

Will the new album be different from the Barcelonas that we used to know? What insipired you this time?
Emanuel: I guess it will be pretty different. There's stuff from the old Barcelona sound, but we've mixed it up with sounds we've ben into before this band. It's both bigger and smaller this time.
Marcus: It is a bit different, yes! If the last album was set in Emanuel's childhood, this album is set more in his teens and older. It's more grown up and at the same time it hasn't lost that loving feeling for childhood and all good things about life. 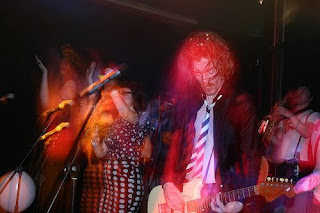 What's the story behind the title? Is it going to be a concept album?
Emanuel: I totally adore concept albums. I grew up listening to Yes and Pink Floyd and that sort of stuff, so I guess I'm kind of damaged. But I guess you have to tell me if it's a concept album or not. I just red a book about Houdini and I was lost.
Marcus: Emanuel has had a couple of years when he only reads biographys, mainly from music people, but suddenly he found one about Harry Houdini. Reading biographies might be his way of dealing with this surreal trip that I'm from Barcelona has been so far.

Did you manage to expand the line-up even further? How many of you are going to play live?
Marcus: Nope, we still count around 30 if we're all present. When on tour we usually are around 20 people. It works out for everyone that way, concerning jobs and other hold ups, and the bus that takes us around Europe has 18 beds to keep everything comfortable.
Emanuel: The number of people isn't that important actually. Those who can make it comes along. But we still fill up a bus.

Emanuel, will you jump from the roof on the crowd once again?
Marcus: I think it's a shoe-in.
Emanuel: I hope so, but the last time I had to stand on the roof for ten minutes because the electricity was lost. I hope that won't happen again. And also, I've got a little surprise with me this time that can make the ending of the show even better than last time. See you in the water!

(pics by Karen Superstar and Lucio)

A music blog and radio show since 2001